What is Punycode? Fake domains that deceive the human eye

Punycode
noun
Unicode that converts words that cannot be written in ASCII, like the Greek word for thank you ‘ευχαριστώ’ into an ASCII encoding, like ‘xn--mxahn5algcq2e’ for use as domain names.
What does this actually mean?!

As with all things computers, it all boils down to numbers. Every letter, character, or emoji we type has a unique binary number associated with it so that our computers can process them. ASCII, a character encoding standard, uses 7 bits to code up to 127 characters, enough to code the Alphabet in upper and lower case, numbers 0-9 and some additional special characters. Where ASCII falls down is that it does not support languages such as Greek, Hebrew, and Arabic for example, this is where Unicode comes in; it uses 32 bits to code up to 2,147,483,647 characters! Unicode gives us enough options to support any language and even our ever-growing collection of emojis.

So where does Punycode come in?

Punycode is a way of converting words that cannot be written in ASCII, into a Unicode ASCII encoding. Why would you want to do this? The global Domain Name System (DNS), the naming system for any resource connected to the internet, is limited to ASCII characters. With punycode, you can include non-ASCII characters within a domain name by creating “bootstring” encoding of Unicode as part of a complicated encoding process.

How does a Punycode attack work?

Unicode characters can look the same to the naked eye but actually, have a different web address. Some letters in the Roman alphabet, used by the majority of modern languages, are the same shape as letters in Greek, Cyrillic, and other alphabets, so it’s easy for an attacker to launch a domain name that replaces some ASCII characters with Unicode characters. For example, you could swap a normal T for a Greek Tau: τ, the user would see the almost identical T symbol but the punycode behind this, read by the computer, is actually xn--5xa. Depending on how the browser renders this information in the address bar, these sneaky little characters are impossible for us humans to identify.
This technique is called a homograph attack, the URLs will look legitimate, and the content on the page might appear the same on the face of it but its actually a different website set up to steal the victim’s sensitive data or to infect the user’s device. These attacks use common techniques like phishing, forced downloads, and scams.

Just Browsing – Is Punycode an issue on all browsers?

By default, many web browsers use the xn-- prefix known as an ASCII compatible encoding prefix to indicate to the web browser that the domain uses punycode to represent unicode characters. This is a measure to defend against Homograph phishing attacks. However, not all browsers display the punycode prefix, leaving visitors none-the-wiser.
Hackers can exploit the vulnerability in the browsers that don’t use the prefix to display their fake domain names as the websites of legitimate services to steal login credentials, credit card numbers and other sensitive information from users.
In this example, Chinese security researcher Xudong Zheng discovered a loophole that allowed him to register the domain name xn--80ak6aa92e.com and bypass protection, which appears as “apple.com” by all vulnerable web browsers, which at the time included Chrome, Firefox, and Opera. Internet Explorer, Microsoft Edge, Apple Safari, Brave, and Vivaldi were not vulnerable.
Our current research shows the following behavior on the two major web browsers Chrome and Safari:

Punycode attacks can take place on both desktop and mobile, as the various browser developers tend to treat punycode the same across all platforms. In short, if they display unicode to a user on one device, they do it on all platforms. Most of the current research into punycode focuses on how browsers treat these domains, but our research goes beyond the browser, to demonstrate that the way apps treat punycode is just as important. In our testing, we observed deceptive punycode domains were not being flagged as suspicious by widely used communication and collaboration tools used by employees. We tested the following apps on iOS and Android devices: Gmail, Apple Mail, iMessage, Message+, Whatsapp, Facebook Messenger, Skype, and Instagram. Only Facebook Messenger, Instagram and Skype provided an opportunity for the user to identify the punycode URL by either showing a preview of the webpage with the xn prefix, or in the case of skype, by not providing a hyperlink for domains using Unicode, meaning users can’t click through from the message. While these apps are not providing the best methods of defense, they at least provide an opportunity to assess suspicious links more closely.

So it seems that by displaying the deceptive Unicode that the majority of apps are opting to deliver an enhanced user experience over providing security to catch malicious sites. Some of the responsibility should fall upon the developers of these apps to ensure multiple layers of security are enforced to effectively defend against these attacks.

Why are Punycode attacks a bigger problem on mobile?

Our research into Punycode attacks on mobile identified a number of new malicious domains (listed below). Not only are these sites hosting phishing attacks on domains that are visually deceptive to users, but they are optimized for mobile, meaning hackers are aware of the difficulties faced by mobile users in identifying deceptive URLs. By targeting mobile users, these attacks are resulting in more successful phishing campaigns.
Phishing attacks are generally more difficult to detect on mobile for a number of reasons, this becomes near impossible when punycode is introduced and displayed properly.

It’s getting emotional – How do Emoji domains factor in?

In the same way that special characters of different languages are encoded as punycode so too can the ever-growing library of emojis. An emoji domain is literally a domain with an emoji in it e.g. www.��.com, punycode is essential for this.
Here’s a recent example identified by Jamf's intelligent machine learning machine, MI:RIAM:

Wandera’s Zero-day phishing research has been identifying Punycode attacks since 2017. We’ve seen a 250% increase in the number of Punycode domains over the last 12 months: 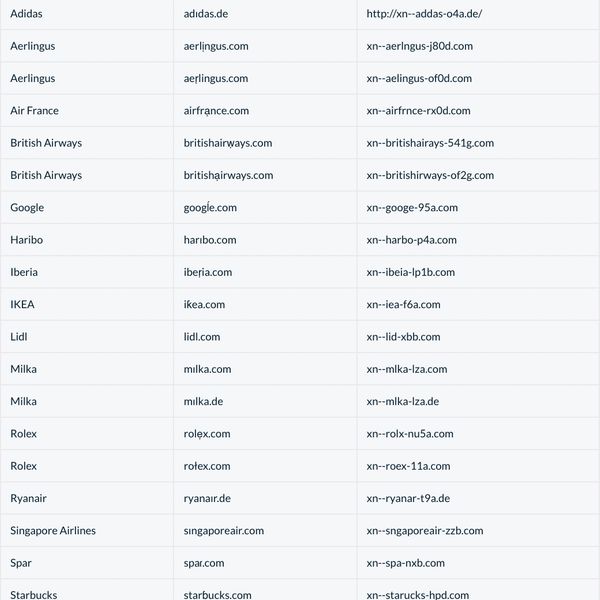 In some of the examples we have seen, the sites display competitions that offer prizes in exchange for sharing a link over WhatsApp, and sometimes they redirect the user to other scam pages when the user hits the back button multiple times. In other cases, the pages immediately redirect to other sites displaying app download advertisements of software updates.

Shortly after discovery and documentation, the content from most of these sites was removed. This is proof of how fast hackers are moving and is consistent with other forms of phishing attacks we are seeing.

Our research shows a new phishing site is created every 20 seconds and they are usually only live for four hours before hackers take them down and move on to create another deceiving domain. A clever way to cover their tracks and evade detection.

7 Ways to avoid a Punycode attack

Don't let your users fall for these deceptive attacks by deploying Jamf's security products to your mobile fleet and protect your devices, users and data.

Liarna La Porta
Jamf
Liarna is a communications pro with seven years of experience in the cybersecurity industry. She works closely with Jamf’s threat researchers and data analysts to unearth the latest security trends.
Previous Blog Post:
Prev
Learn how to scale your global IT Blog Homepage
Next Blog Post:
Next
Help users activate Microsoft Office 365 and configure Outlook in one click
Related Resources
Blog

How do I know if I’ve been cryptojacked?

What is a Man-in-the-Middle (MitM) attack?

How much is Shadow IT costing you?